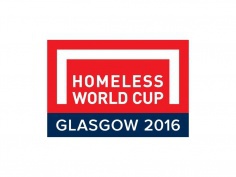 Ayrshire Referees, Scott Sturgeon and David Rorison, received notification in April that they had been chosen to officiate at the 2016 Homeless World Cup, being held at George Square in Glasgow.

A total of 64 teams represented 52 countries from across the World between Sunday 10th and Saturday 16th July.

Speaking to the Ayrshire Refs' website, Scott gave an insight to his time in Glasgow:

"It all began back in 2001 when founder Mel Young realised that through the spirit of football  they could change homeless people's lives as the homeless World Cup is a unique, pioneering social movement which uses football to change their own lives.

They do this by gaining access to one of the national partner transformative programmes where the can then gain access to qualify for there national team.

94% say the tournament  positively impacted on their lives

77% changed their lives because of their involvement with football and

71% continue to play the sport after the tournament.

A person can only play one year as a player but then can come back in future years as part of the coaching team.  The games consist of 4 a side with two halves of 7 minutes

One difference is that at least one player must remain in the opposition half of play. A penalty is awarded if a whole team is in its own half.  Also if a team passes back to there keeper three times in a row a penalty Is awarded.  All free kicks were indirect.

And, any player holding the perimeter boards with both hands to gain an advantage, a free kick was awarded.  A blue card was also  in place which basically replaced the yellow card and if a player was shown this they had a two minute sin bin.

And no game finished in a draw such a score at full time resulted in sudden death penalties.

We had 23 referees taking part from all over the world

My experience of this tournament is one I am not going to forget about as I never thought in my refereeing career I would be refereeing games bang smack in the centre of Glasgow. The first day consisted of arriving at the venue and collecting our credentials from referee coordinator Iain McGill. We were then introduced to our brothers from far and wide and then we had a walk round the pitches to see where the action would of be taking place. It was then back to the changing rooms where we were presented with our match kit from Hary Milas from Australia and owner of Refsworld.  It was then time for kick off after the opening ceremony and it was an amazing experience as I didn't realise how quick and fast paced the games were.  Also how much skill was involved and how skilful some of the players were.  All I can say is I am glad I got to be part of, and experience such a amazing event one that I will treasure forever. We came as 23 individual referees and having built up excellent relationships left as 23 friends."

For information on the Homeless World Cup, or to volunteer at the Glasgow tournament,  find out more at www.homelessworldcup.org