In memory of Jim McCluskey and his commitment to supporting young referees to develop, the Jim McCluskey Trophy was introduced in 2014/15 season.  This trophy would be awarded to the referee who officiated at the highest level in youth football over the course of the season.  Our winner of the Jim McCluskey Trophy for season 2015/16 is David Hainey, following his appointment as referee for the Scottish Youth Cup Final between Rossvale and Banks O'Dee Albion 2000's on 1st May 2016.  Pictured below is David receiving his award from Ayrshire Referee President, Mike Ingram. 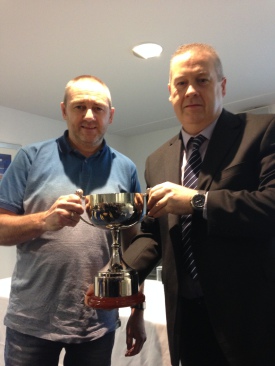 Referee of the Year

In addition to the Jim McCluskey Trophy, our Development Advisers consider which referee has progressed most over the course of the year, listened to advisers and improved their performance based on this feedback.  For the season 2015/16, the Referee of the Year Trophy was presented to Paul Timmons, whose progress also saw him promoted to a Category 3 development Referee.  On the back of this, Paul will be regularly refereeing in 'The Juniors' for the 2016/17 season.  Paul is seen below being presented with his award by President Mike Ingram. 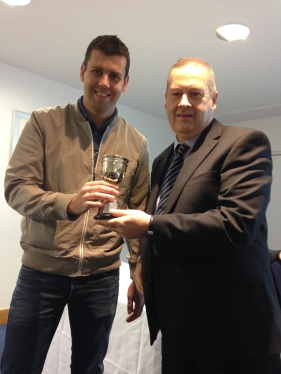